NATIONAL PARKS IN THE DOMINICAN REPUBLIC 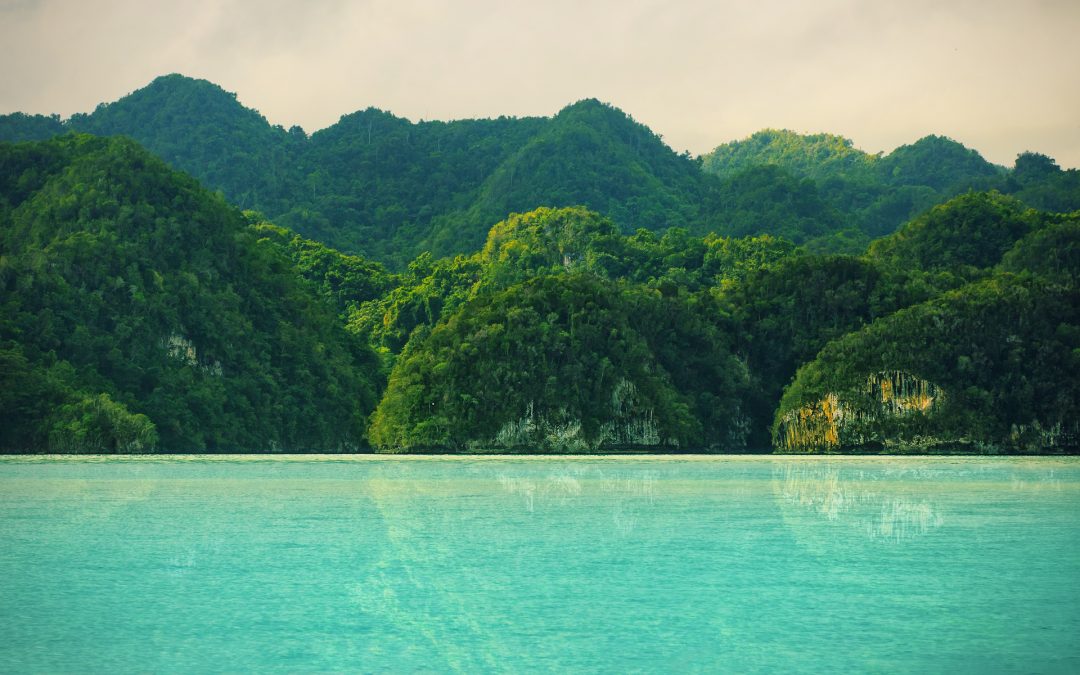 1. Parque Nacional Los Haitises.
Covering an area stretching 1,600 km² (618 square miles), Los Haitises National Park is one of the crown jewels of the Dominican Republic’s national park system. Los Haitises–which translates into “hilly land” in the Taino language–attracts numerous visitors who come here by boat to see its magnificent series of 30-meter (98-foot) high rock formations jutting out of the water. The park also boasts extensive mangroves along its bay, which is dotted with cayes that are home to multiple bird colonies, as well as a series of caves known for having one of the highest numbers of petroglyphs and pictographs in the country.
You’ll easily spot the endangered Ridgway’s Hawk, the Hispaniolan Piculet, the Hispaniolan Woodpecker, the Hispaniolan Emerald, as well as pelicans, frigate birds, herons, and many more majestic birds in flight over the park’s extensive landscape. Los Haitises also nurtures one of the DR’s few remaining rainforests, once used as a filming location for the feature film Jurassic Park. Explore the park by boat from Samaná, hike its rainforest to view flora up close, or kayak along with its lush mangrove system. At Cap el Limon we’d be happy to organize an excursion by catamaran to this beautiful National Park.

2. Parque Nacional Monte Cristi.
Located in the northwestern region of the country, Parque Nacional Monte Cristi is formed by 500 km² of land and marine ecosystems. Its fauna is rich and plenty of reptiles, especially the American crocodile, different amphibian species, and diverse kinds of birds like pelicans, bubí birds, silverfish insects, and cuckoo birds. The characteristical flora is the Sabia Montecristi, endemic in this area, and the red and dark mangroves. Most of the park is flat land except for El Morro de Montecristi, an impressive 242 meter-high promontory, that offers spectacular and interesting views of the whole park and its shore.
A must-see natural environment if you are traveling along the northern coast of the Dominican Republic. Explore this national park and enjoy its lovely views and beautiful sandy beaches

3. Isla Cabritos and Enriquillo Lake National Park
Enriquillo Lake is the largest natural water-reserve in the Dominican Republic and it is located in the country’s southwestern region, within the borders of Isla Cabritos and Enriquillo Lake National Park. The lake has an approximate extension of 375 square kilometers, even though it can vary due to the annual average rainfall, that is usually scarce in this area. The average temperature ranges from 27 to 36 ºC. Its waters are twice as salty as the seas. One of the biggest American crocodile wild communities inhabits in these salty waters, nevertheless, it still being endangered. It feeds on tilapia, a fish species that was introduced in this habitat. The lake’s surrounding vegetation is composed of dry forests, except for the areas where there are mangroves, a very common tree in the country.
The park’s office and main entrance are located at just a few kilometers away from “La Descubierta”. It is possible to observe an educational exhibition about the national park, and also observe the landscape from the viewpoint in the visitors’ center. In addition, the park’s facilities include a cafeteria, a multipurpose room, two floating docks, an aviary, an observation platform, and an itinerary that is signposted with animal-interpretation billboards. Isla Cabritos is the one and only island that remains inside the lake nowadays. It is important because it is the park’s main tourist-attraction spot, for both domestic and foreign tourism. But, in the park, there are also other interesting spots like La Azufrada, Los Borbollones, Boca de Cachón Bay, and Las Caritas Cave.

4. Valle Nuevo National Park
Known for offering exceptional bird watching and mountain trekking opportunities, Valle Nuevo National Park is one of Constanza’s crown jewels. Past the exit to the Aguas Blancas waterfall, the road climbs toward a mountaintop mesa at an altitude of more than 2,200 meters (7,200 feet), surrounding you with tall pine and green ebony trees. This protected area, known as “Madre de las Aguas” or the mother of water sources, boasts multiple rivers that supply the country, with temperatures hovering between 14°C (57°F) and 22°C (71°F). In December, they can drop to below zero, with frost and even ice on occasion.
Valle Nuevo’s biodiversity is astounding: stretching 902 square kilometers (348 square miles), the park encompasses cloud forest, highland plains, and vast savannas of alpine grass hugged by rocky mountains, home to over 500 species of plants, of which 138 are endemic to Valle Nuevo, as well as numerous species of amphibians, reptiles, butterflies, and birds. It’s the sort of cold, remote, and lush mountainous landscape you won’t see anywhere else in the country, with a myriad of opportunities to commune in nature–hiking, horseback riding or biking around criollo pines, and near mist-covered peaks. Tucked deep amid this scenery is an eco-lodge, the only one located within the limits of Valle Nuevo National Park.

5. “La Caleta” Underwater National Park
This underwater park is the resting place of several shipwrecks, including the Hickory, a salvage ship that was scuttled in 1984, the year the park was founded. It’s now visited as a popular dive site, depending on which dive operator you choose. If you’re interested in diving here, contact one of the dive shops in Boca Chica or any of the resorts in Juan Dolio.
The Parque Nacional Submarino La Caleta is a national park located approximately 20 kilometers from Santo Domingo, the capital of the Dominican Republic. It is adjacent to Las Americas International Airport. Created by Decree No. 249 on September 25, 1986, La Caleta Underwater National Park is the first underwater park in the Dominican Republic and is considered by experts to be one of the five best diving locations in the Caribbean. It has a maximum depth of 180 meters. Many coral reefs can be found between 10 meters and 50 meters. It is one of the most visited parks in the country and attracts divers from both the Dominican Republic and other countries.